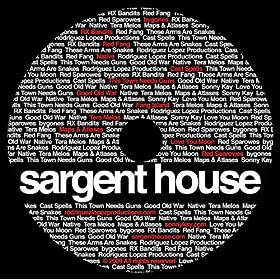 Amazon is currently honoring the indie label on its front page, adding it to the ranks of the online retailer’s other championed imprints. The entire free compilation is available HERE.

Sargent House is a Los Angeles based management company and record label. It was founded in June 2006 by Cathy Pellow who also owns music video production company and syndicated television show Refused TV. Pellow began managing the metamorphic rock outfit RX Bandits in 2006. The band needed to release its new album …And The Battle Begun so Pellow decided to launch her own record label (largely out of interest in doing things differently from the traditional model of record labels.) From that point onward, Pellow continued to manage bands and release records, all under the Sargent House banner.

Currently, all Sargent House managed bands also have a release on the SH label. Drummer Zach Hill is the most recent management and label signing. His next solo album, Face Tat is slated for release on Sargent House.

06. Tera Melos “A Spoonful of Slurry”

12. Red Sparowes “The Fear Is Excruciating, But Therein Lies the Answer”