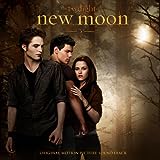 I have been hearing  A LOT of buzz around the New Moon soundtrack and it is getting me excited!  Excited for a great new CD and for the movie premiere on 11-20-09.  I am all about Jacob and New Moon was my favorite book in the Twilight series.
But back to the soundtrack Death Cab for Cutie recently revealed that they’ll be having the lead single on the New Moon soundtrack, are about to start shooting a video for the song, “Meet me on the Equinox”, and hope to have Robert Pattinson and others join them for the fun. The new track will premiere on September 13 via MTV’s Web site during this year’s MTV Video Music Awards ceremony, and on radio right after that.
The full soundtrack for New Moon film has been announced for a October 29 release on Chop Shop/Atlantic Records.  No other artists have been “officially” announced for the soundtrack.  But rumors are circling that it will have a more indie-music sound, with artists like Radiohead’s Thom Yorke, Bon Iver, Grizzly Bear and Muse.

The New Moon soundtrack is available for pre-order on Amazon.com