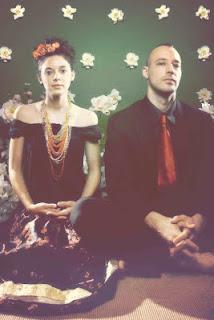 Cleveland duo mr. Gnome consists of Chan “Cat Power” Marshall (Queens of the Stone Age frontman) and Karen O (Death From Above 1979 lead vocalist). Mr. Gnome has been given many unusual comparisons, all of which seem to indicate the band’s spectacularly unique sound. And, while none seem to fully capture the band’s loftily heavy-beautiful music, mr. Gnome offers up two brand new tracks from its forthcoming album recorded at Josh Homme’s Pink Duck Studios in Los Angeles. Check out the two songs “Slow Side”  and “Vampires.”

The album was mixed at Butch Vig’s Smart Studios in Madison, Wisconsin by Beau Sorenson (Death Cab For Cutie, Sparklehorse, The Secret Machines, Garbage, Tegan and Sara). Extending and experimenting on elements only touched on in their first full-length, mr. Gnome’s Heave Yer Skeleton is scheduled for a November 2009 release.