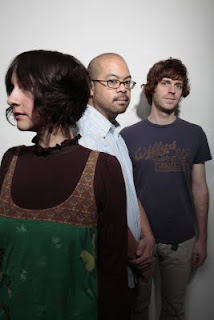 The much-anticipated and highly acclaimed debut album by Los Angeles trio The Happy Hollows officially hits streets October 6th, 2009. The album, Spells is a culmination of their work with producer and former Mighty Lemon Drops guitarist David Newton (The Little Ones, The Blood Arm), who also produced the group’s 2008 EP Imaginary.

The young group has an  earned a considerable following up and down the west coast with their energetic and charismatic performance of  noise-pop that is infectious to the ears.

The band been  fixture on the L.A. music scene having played their first shows in Japanese restaurants, laundromats, and small local clubs since forming in 2006. In their first year as a band, they snuck into a studio at night and, in two sessions, recorded Bunnies and Bombs, an EP that attracted the attention of the L.A.’s underground music scene. After seeing them play a show, established L.A. heroes Silversun Pickups asked The Happy Hollows to open for them at The Wiltern and The Fillmore. In 2008, fellow art-rock outfit Deerhoof invited the Hollows to open for them on their album release shows at The Avalon and The Great American Music Hall.

The band is streaming the entire album on their website. Listen to it here!