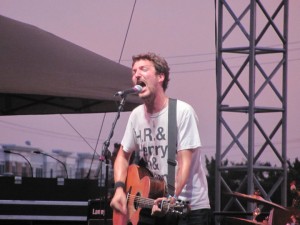 The rock music scene is home to an immeasurable number of bands and artists, the vast majority of which are not household names. In “Rocking Under the Radar,” I attempt to highlight one of these under-the-radar acts by applying a very basic investigative method. If you want a quick synopsis of a band or artist you may not know about, this is the place to look.

Where Is He From? London, England

When Did He Start? He formally started his career as a solo artist in 2005.

Who Is He? Born in Bahrain, but brought up in England, Frank Turner is an Eton-educated punk turned singer/songwriter. He made his first major appearance in the public eye as the lead singer of post-hardcore band Million Dead, but decided to launch a solo career after the band broke up in 2005. Since then, he has released 3 full-length albums, as well as a few EPs and compilations of his music, all of which contain songs that run the stylistic gamut from folk to punk and back again. Turner has played festivals, opened for bands such as The Offspring and The Gaslight Anthem, and is currently supporting Flogging Molly on their US tour.

Why Should You Care? Because there are very few rock songwriters out there that write with the wit and sense of urgency that Turner does. He fully understands the importance of lyrical quality in a song, but does not let that poetic urge get in the way of a good melody. Whether playing with a backing band or just with an acoustic guitar, Turner is a musical force to be reckoned with, as well as an enthralling performer. I have personally witnessed him make fans out of a bunch of punk kids who were ready to throw bottles at him when he came out on stage with nothing but an acoustic guitar while opening for The Offspring. That’s the kind of musical energy that Turner brings to the music scene.

What Does He Have To Say?

How Does He Sound?