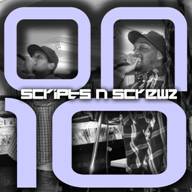 Scripts ‘n Screwz is back with their all-new single, “ON 10.” The meaning of “ON 10” originally came from the duo joking around and describing ‘extreme behavior’. The kind of behavior that is “ON 10.”

The track is already lighting up the darkness of the internet and is the lead-in to the duo’s upcoming sophomore album The Hangover which follows the acclaimed debut, The New Noise. You can listen to the track below.

Scripts ‘n Screwz fans hungry for more new music before The Hangover is released can tide themselves over with a free Valentine’s Day mix tape by Scripts ‘n Screwz member, Loose Screwz. Entitled I Heart Beats, the full-length MP3 can be downloaded right now, right HERE.