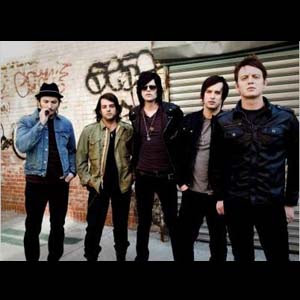 Gearing up for summer, AM Taxi is pumped to announce that their Virgin Records debut is available now exclusively on

As part of iTunes’ ‘Next Big Thing’, the digital release comes before We Don’t Stand A Chance hits stores on June 8th followed by coast-to-coast dates through the summer via Warped Tour, making the Chicago-based band one of few to be invited on the nation-wide run prior to releasing an album.

AM Taxi have been honing their live chops, recently finishing spring dates with Spill Canvas while their MySpace ‘Introducing’ profile debuted May 9th on the homepage of MySpace.com. The band’s video for “Fed Up” premiered on MySpace Music. Watch the band’s fresh video for “Fed Up” here!

“Our motto in the studio was, ‘If it ain’t broke, break it,’” explains frontman Adam Krier about recording We Don’t Stand A Chance. “We’d try things from every possible angle.”

Recorded in Austin TX, AM Taxi’s polished first record features influences ranging from The Clash to Sublime to The Boss mixed with the group’s own contemporary punk-rock infusions and was produced by Mike McCarthy (Spoon, Patty Griffin, Alberta Cross).

“We weren’t so interested in making a record that sounded current, as we were something that could be classic,” Krier says.