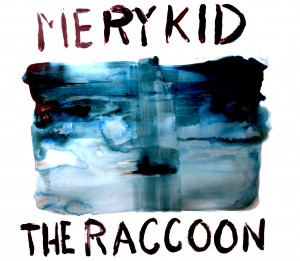 I’ve never had the pleasure of owning a drum machine, a synthesizer, or even an electric keyboard. Now, while I may not possess any of things, Merykid clearly does, as made evident on his latest musical endeavor, The Raccoon. “From Down Here” and “Don’t Say You’ll Wait For Me”, the intro and interlude respectfully, sound like someone playing “Guitar Hero” on expert prematurely, as each piece is littered with weird squeaks and noises. Sadly, “Thoughts to Sound”, the first full length track sounds just as muddled, with a drum machine in the background that doesn’t quite match the pace of the lyrics being sung. The much lauded auto-tune then makes an appearance on “Two Wrongs”; unfortunately what starts as an attempt at creativity, similar to what Kanye did on his new album, quickly becomes difficult to listen to.

Whether the sound of The Raccoon comes from inexperience or creativity run wild, an odd sense awkwardness oozes from nearly every song. The spacey, “Astronaut” (no pun intended) is kind of like a bad musical acid trip, the listener doesn’t really know where they are and probably wishes it would be over already. All is not lost however, as there is a definite place these songs belong, placed as a backdrop to a new age art show, with Deadmau5 on the turntables mixing them. Outside of this specific scenario, I really am at a loss as to where one listens to The Raccoon. Honestly, I’d recommend listening to it just so you can try to understand my auditory confusion.

For more information on Merykid check out his MySpace and Facebook pages. Get Raccoon now on iTunes!