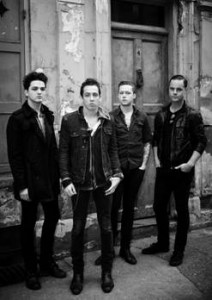 Today’s song is “Trouble On The Way” by MONA. The Nashville quartet has come a long way in a short time. In only a few months since releasing singles “Listen To Your Love” and “Trouble on The Way” on their own label ‘Zion Noiz Recordings via Rough Trade shops and independent store across the UK this year, they have garnered raves from critics and fans alike.

In addition to being signed with Mercury Records in the US, they have captured the attention of major media outlets including BBC Radio, who named the band in their Sound of 2011 poll, MTV, NME, Clash Magazine and Q, all of which named Mona among the top new bands to watch in 2011. They even nabbed a prestigious spot on the UK’s Later with Jools Holland last month- a rare task for a band who hasn’t yet released their debut LP.

Currently, the guys are off on a mini winter tour with shows in New York City, Brooklyn, Los Angeles and San Francisco. See below for the current upcoming dates and listen to their single “Trouble On The Way” and for more information on MONA see their official website, MySpace, Facebook, and Twitter pages.