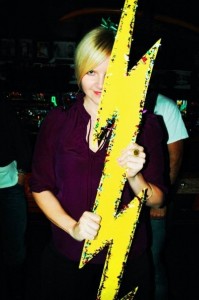 Today’s song is “Stars” by Barbie Hatch. This song is off her debut Hypertrophic Heart which drops today. Barbie Hatch is an electro dance-pop artist, signed to Spectrophonic Sound, the label responsible for N.A.S.A. and Squeak. E. Clean.

Barbie Hatch first gained attention as a guest vocalist on the track “Way Down” by N.A.S.A., appearing alongside RZA and John Frusciante, and performing live at a handful of shows with the electronic dance group in 2009 and 2010. In late 2010 Barbie returned and performed on the N.A.S.A. track “I Wanna be Your Lover” on the remix album The Big Bang alongside the artist Maximum Hedrum.

Barbie’s earliest collaborations were with the Canadian Hip Hop artists Swollen Members, appearing on their 2006 and 2009 releases Black Magic and Armed to the Teeth, respectively.

Both the N.A.S.A. and Swollen Members collaborations were produced by Squeak E. Clean, and it was at his studio that she met her collaborators Brent Nichols and Koool G. Murder. Nichols and Murder co-produced Barbie’s debut solo release Hypertrophic Heart, which was a result of two years of intermittent stints in the studio between paid sessions. It was, in more ways than one, a labor of love.

Listen below and for more information check out her Myspace, Facebook, and Twitter pages. Get Hypertrophic Heart today on iTunes.