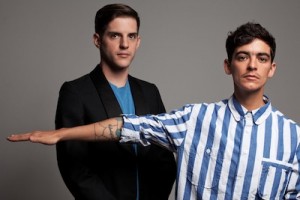 Photo Credit: Allison Michael Orenstein
Today’s song is “Simultaneously” by MEN. This is off their debut album Talk About Body. Based out of Brooklyn, the group is comprised of LE TIGRE’s JD Samson, cult icon and leader in the LGBT community, and Ladybug Transistor’s Michael O’Neill. The group began in 2007 with the DJ/production/remix team of LE TIGRE members JD Samson and Johanna Fateman. With LE TIGRE on hiatus, when the duo began to write new songs, it made sense to merge their efforts with JD’s other project HIRSUTE (Michael O’Neill, JD Samson, Emily Roysdon and Ginger Brooks Takahashi). Michael and JD now comprise the core of MEN, with Johanna Fateman and artist Emily Roysdon contributing as writers, consultants, and producers. MEN have an with the beat thumping dance groove that is sure to get your body pumping.

MEN will be hitting the road with Brazil’s dance-punk CSS for an extensive tour of North America. In honor of the tour, the bands collaborated to make a split 7” vinyl of never heard before tracks of the bands swapping remixes. On one side is the CSS remix of MEN’s “Rip Off” – (CSS Desperately Seeking Julia Cafritz Rework) and the other side MEN’s remix of CSS’s “City Grrl” – (MEN Meets Grrl Remix). Besides trading the remixes, each band made the artwork for their respective vinyl sides. The split 7″ vinyl is limited to 1000 copies and for sale on tour only. This will be one show you won’t want to miss.