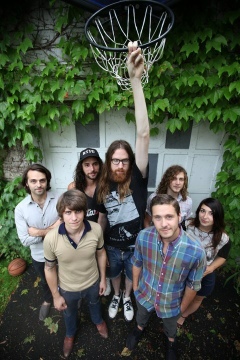 Webster defines an Aficionado as a person who likes, knows about, and appreciates a usually fervently pursued interest or activity; a devotee. This month ESBMusic suggests all you music aficionados become a fan of November’s Artist of the Month Aficionado.

Aficionado is a talented 7 piece band, hailing from Albany, NY with roots in punk music but have developed a unique style that they are happy to call their own. The band mixes organ, flute, and occasional horn arrangements into it’s unorthodox blend of post-punk. Upon their inception in 2004, Aficionado began touring and self-releasing demos, but flew under the radar until signing with No Sleep Records early last Summer. In Fall of 2010, they had their first official release, When It Comes to Creation which included an everything-but-the-kitchen-sink instrumental approach.

When creating their newest record, they drew influence from an array of bands ranging from At the Drive-In, to Cursive, to the Hold Steady. Using these band’s influences combined with their own original sound, Aficionado has crafted a superb album for their self titled full length effort. Produced and recorded by AJ Mogis (Bright Eyes, M. Ward, Cursive), they have crafted 10 songs that are sharp and more compact then previous efforts, with less of an emphasis on wowing people with over the top antics and more of a focus on the songs themselves. Their label tout’s this album as having a lyrical basis that is centered on expositions of thinking for yourself, attaining what it takes to be a charismatic person, heeding to the realities of aging, and acceptance of change.

The record begins with “The Things You Like,” a track with emotionally charged lyrics, a catchy chorus and a tempo that constantly keeps you on your toes. It provides a good introductory track for the band, introducing you to the complementary vocals of Nick Warchol and Laura Carrozza, over a experimental indie-punk instrumentation provided by band member – Craig Dutra (Keys) James Kehoe (Guitar), Chris Tenerowicz (Guitar/Horns), Chris Kehoe (Bass), and Mark O’Brien (Drums).

The opener leads seamlessly into the next track “Stir Like Hell” possibly one of the best songs on the album. Blending piano, pivoting drum beats, quality guitar harmonies, and clever lyrics. The female only vocals that sweep in during the latter half really help the track shine.

“Everything Was Right,” my personal favorite and one of the strongest tracks, has a killer start with soft clean guitars before leading into Warchol’s aggressive vocals with piercing guitars riffs and then building into an energy filled chorus. This haunting ballad best showcases what the band is capable of solid lyrics, incorporating different tempos and a variety of vocal styling’s, with a multitude of instruments (including a stellar flute solo) all while leading you in unexpected directions.

Other standout tracks include: “Honest” a fun, catchy punk rock song with great instrumentals, and guest vocals by Travis Shettel of Piebald. “Confidence is Intimidating” which feature a strong ending consisting of dual vocals and a very interesting musical accompaniment. “Permanent” the slowest track of the album which features stand out lyrics and honest vocals that really make you connect to this powerful track. This song is unlike the other tracks and conveys a Dashboard or Against Me! like vibe really making you feel the emotion especially during the heartbreaking group vocal that brings the heavily acoustic track to a climax. This song also showcases keyboardist Craig Dutra at his best with the keys playing an essential part of the song, really complimenting Warchol’s vocals.

The album closes with “Open Doors” two minute long guitar riffs that fade the record out and leave you with feeling that you just discovered a new band worth following.

Overall the albums production is superb, with guitar tones that are satisfyingly gritty yet clear and good bit of experimentation that is sprinkled throughout the record, including numerous appearances of keys and a flute. The albums vocals are perhaps Aficionado’s most defining characteristic with lead vocalist Nick Warchol nasally (Adam Lazzara esque) voice providing a sense of urgency while being complimented by Carrozza’s airy sound over thought provoking lyrics.

Aficionado has just finished touring with Tim Kasher and are about to start touring the west in December with Fair to Midland. Good news for all you local ESBMusic readers; they are coming back to the east coast for a short stint from December 26th through December 30th where they are opening for Thursday and Mewithoutyou before embarking on an European stint in January.

ESBMusic caught up with the band to talk about getting signed, being a large band on the road, and what they are up to next year.

ESBM: How did you all come together and start playing?

Aficionado: The earliest inception of Aficionado came together in fall of 2004 (God, we’ve been a band for a long time!). A bunch of us were attending colleges in the Albany area and I wanted to start something casual. Six months later we went on our first full US tour. We started off as a 5 piece, just the standard, 2 guitars, 1 bass, drums, and vocals…and at times we’ve had as many as 10 people in the band (we found that to be a bit excessive). The current inception of Aficionado has existed for about 3 years, now, and it has 7 full-time members.

ESBM: With all your diverse instruments in your music, how would you describe your sound to someone who never heard it before?

Aficionado: Generally, I describe it as being “punk infused indie-rock” or something like that. Sometimes people classify it into the “post-hardcore” category. Essentially, it’s indie-rock, but with a punk rock attitude. We incorporate a flute and piano/organ, sometimes in conventional ways, sometimes in unconventional ways. There are male and female vocals, mostly singing in harmony with one another but sometimes switching off lead parts.

Aficionado: Before we were signed to No Sleep, we did a ton of DIY touring, released a ton of demos and EPs on our own, but we still weren’t on many people’s radar. Like most bands, we wanted to keep moving forward and reach the maximum possible audience with our music. With No Sleep’s help, we were in a much better position to do this. Especially because the label has become somewhat of a reputable source for legitimate music over the course of the past few years, we were put in really good company, and in a lot of ways, No Sleep really put us on the map for a lot of people.

ESBM: On your tour you’re playing with some great bands, who are you most excited to share a stage with?

Aficionado: Lately we’ve been getting to go on tour with some pretty awesome bands. Some of which are bands that have been HUGE musical influences on me throughout my life. Recently we did a tour with Tim Kasher, who might be a little better known for his other musical projects, Cursive and The Good Life. That tour was unreal. In about a week we’re doing a bunch of dates with TS and the Past Haunts, which is the new project from Travis Shettel (of Piebald). They’re actually flying out from Los Angeles and we’re ALL sharing a van together for the dates. Getting to share the stage (and the van) with people that I’ve always sort of looked up to is a really rewarding and cool experience.

ESBM: You are a rather large band, does it get hard when you’re on the road, and you find yourself in close quarters?

Aficionado: Yes and No. We definitely find ourselves in closer quarters than we would if we were a smaller band, and sometimes that can get a little annoying. But for the most part, I think it’s actually more of a blessing than a curse. If you’re constantly socializing with the same couple of people, that can get boring, and then, out of boredom people fight and bicker about nothing. But with our band, there are so many people that we can rotate around. So if you’re ever starting to get sick of someone, you can just hang out with someone else! It’s great!
Also, we’re all great friends, and while I’m sure we all get sick of one another from time to time, we all know each other well enough to know exactly what we’re signed up for. This makes for mostly happy travels.

ESBM: You have been touring all over the country, which areas have the best crowds? Where do you like to play the most?

Aficionado: Mind you – the best crowds don’t always mean the biggest crowds. It’s quality over quantity with this sort of thing. Attitude is everything.
One of our favorite places to play in the country is Greenville, South Carolina. They have a great DIY scene there, and the people there are always amazingly hospitable to us. We just like to play for REAL people who don’t give a fuck about “looking cool”, who aren’t afraid to let their guards down and have a good time.

ESBM: You recently released your self-titled debut album, how does it compare with your earlier releases?

Aficionado: Prior to this record, we’ve only had one other official release. It was an EP called When It Comes to Creation, which we put out on No Sleep last year. Comparatively, our newest record is a lot more focused. We’ve really honed in on our sound. In the past couple years, we’ve been playing together a lot…touring, etc., and I think this has really helped everyone in the band stay on the same page. Hence, the result is a record that’s a lot more centered and cohesive.

ESBM: For Laura, what is it like being on tour with a harem of men?

Aficionado: Very used to it by now! I thoroughly enjoy the rambunctious nature of my bandmates; someone is always getting into a hilarious predicament. However, I can definitely feel an imbalance sometimes. I love to make friends with fellow estrogen-possessors along the way and read girly graphic novels.

ESBM: What are you plans for next year?

Aficionado: In the next year we want to just keep touring, writing, and growing as a band. We already have a bunch of new musical ideas that we’re going to start messing around with. Other than that, I think we’re just gonna see where the road takes us.