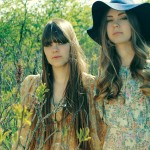 photo credit: Neil Krug
Today’s song is “The Lion’s Roar” by First Aid Kit. The Swedish duo is made up of sisters Klara and Johanna Söderberg. This track is available now as a 7-inch at the band’s shows and will be released in stores on December 6th. This is the title track of First Aid Kit’s upcoming EP which will be released on January 24th, 2012 via Wichita Recordings. The video for this song premiered on SPIN.com last month. This LP will be the follow up to last year’s highly-praised debut LP The Big Black & The Blue. First Aid Kit recorded The Lion’s Roar with Mike Mogis (of Bright Eyes and Monsters Of Folk; also producer of Cursive, Lightspeed Champion, Pete Yorn, and many others) in May at his ARC Studios in Omaha, NE. In addition to Klara (vocals, guitar) and Johanna (vocals, autoharp, keys), the album features their father Benkt on bass and Mattias Bergqvist on drums, while Mogis, Nate Walcott (Bright Eyes), and a cast of Omaha-based musicians further round out the sound. “The Lion’s Roar” is a bittersweet song featuring beautiful harmonies by the Söderberg sisters. If it is a taste of what is to come on their LP, it is something to look forward to hearing.

First Aid Kit is currently finishing up their US tour. Following the US shows, the band will return to Europe for eight headlining shows that run through early December. Listen below and for more information on First Aid Kit check out their official website. Get the song now on iTunes!