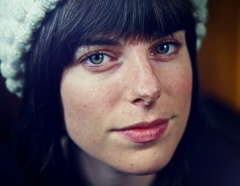 Today’s song is “30 Days” by Madeline. Madeline Adams has been performing simply as Madeline for the last decade. As a teenager she relocated from her hometown of Athens, Georgia to Bloomington, Indiana to work with the punk label Plan-It-X Records (Japanther, Against Me, Defiance, Ohio). After a few years and many punk tours Madeline moved back home to work with Orange Twin Records releasing several albums in collaboration with Phosphorescent, the Athens based Elephant 6 Collective (Neutral Milk Hotel, Olivia Tremor Control, Nana Grizol), Phil Elverum (Mt. Eerie), Karl Blau (The Microphones) and her own Black Velvet Band.

When Madeline Adams first started playing shows around Athens, Georgia, no one could ever remember her last name, so she just stuck with Madeline for the name of her band, which she refers to as a 4-piece rock band with a twist.

“30 Days” is off her latest release B-Sides. The album is a collection of favorites, rarities, and previously unreleased songs left off of her earlier albums.