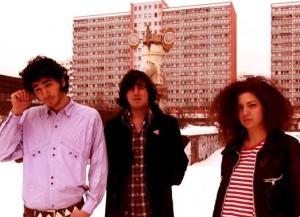 Today’s song is “Hello to Loneliness” by TV Buddhas. This single is off the Berlin-based Israeli band’s recently released 7-inch on the Staatsakt label, distributed by Rough Trade. With the new single out, TV Buddhas is now prepping its next batch of songs.

Over the past four years, the three members of TV Buddhas (Juval Haring, his wife Mickey Triest and her brother Uri Triest) have proven themselves to be one of Europe’s most hardworking acts, regularly performing 200-plus shows a year. The band’s work ethic is echoed in its music, influenced by early 80’s guitar driven punk rock, in all its naivety and pathos, and is reminiscent of bands like The Wipers, Husker Du and The Ramones.

TV Buddhas’ lyrics deal mostly with outsider-ism, failing in life, going nowhere, and TV addiction. Some of the realities that end up in the band’s songs can be shown in the documentary of the first, and highly disastrous TV Buddhas US tour. Titled “Band In The Modern World,” the trailer for the film can be viewed at: www.tvbuddhas.com/movie.htm.

Listen below and for more information on TV Buddhas check out their official website, MySpace, Facebook, and Twitter. Recently, Vice Magazine caught up with the band for a chat. See the interview here.