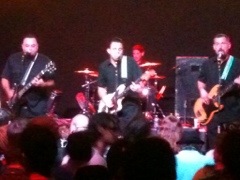 This past weekend I went out to visit a friend in Portland, OR. Being known for a great music scene I was excited for my first show. The Aggrolites were in town and are playing the Hawthorne Theatre.

The California quintet comprised of Alex McKenzie (drums), Roger Rivas (piano, organ), Jesse Wagner (vocals, lead guitar), and Jeff Roffredo (bass) came out to the protest song “We Shall Overcome” all dressed in black button up shirts with smiles on their faces ready play the stoked crowd. Scanning the room you could see their fan base ranged from adults to young kids in high school. It was an interesting mix of people but everyone harmonized and created a beautiful energy that was feeding off the sweet dirty reggae coming from the stage.

The Aggrolites opened with the “Funky Fire” which was a blazing song featuring husky soul vocals and some danceable keys that got the crowd moving and grooving. Watching the band I was entranced by their powerful fusion of soul and reggae.

Throughout the show I was constantly moving from watching the band to the crowd as they danced and swayed to the sweet rhythms and moved in unison creating their playfully circle pits and moshing gently into each other. It was almost as if it was in slow motion. The two were intertwined and became one with each feeding energy off the other. It was a great interaction with hands clapping and hips swaying. The Aggrolites reminded me a bit of a mix between the Mighty Mighty Bosstones and Southside Johnny.

In true concert fashion, they appeased the crowd to come back and play a lengthy encore they were screaming for. They closed with the reggae cover “Don’t Let Me Down.” They sure did not let me down; seeing The Aggrolites was a feel good, great time. If you’re looking for some good dance music that is part bluesy, part reggae this is a band to check out.