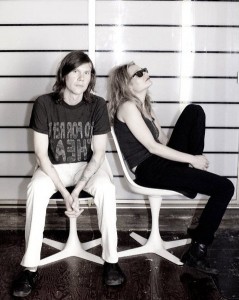 Today’s song is “Gone To Wither” by Redgrave. The Chicago duo consists of Angie Mead (vocalist/guitarist) and Stephen Howard (drums). The two came together after Mead sent Howard demos of her music she recorded in her apartment. Howard has been a working musician since the age of 13, Howard had grown up playing local Chicago blues clubs; his teachers included Willie Smith, John Primer and Eddie Clearwater, his classrooms in music included stages across the U.S., Europe and Africa. . They’ve been playing together as Redgrave since January 2011.

This pair make a massive sound that has been described as “sultry dirty” and compared to the likes of PJ Harvey and Led Zeppelin alike that is “hard to categorize, but immediately easy to feel.” This song is off the band’s debut 7″ and features guitars by Tim Rutili of Califone/Red Red Meat. This June will mark the release of Redgrave’s 5-song debut EP entitled National Act which was recorded by revered engineer Greg Norman (Russian Circles, Pelican) and will be available via Lovitt Records.