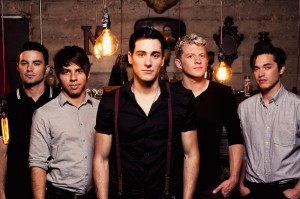 With a scorching summer upon us we thought what better way to celebrate than to feature a kicking hot band. PK, is their name and they hail from San Luis Obispo, California. Composed of Travis Hawley (vocals), Matt DePauw (guitar), Mikel Van Kranenburg (bass), Nick Fotinakes (guitar) and Rico Rodriguez (drums) this quintet makes some fantastical indie rock.

After releasing their first full length Into the Roaring, PK was immediately hand selected and published by Rolling Stone Magazine as 1 of 16 top unsigned artists in the United States. In the past year, the band has opened for such acts as Angels and Airwaves, Twin Atlantic, Aerosmith, Shiny Toy Guns and Youngblood Hawk and has garnered attention from the likes of Nylon Guys, Alternative Press, Pac Sun Music, RCRDLBL, Filter Magazine and Dianna Agron of GLEE’s blog, “You Me & Charlie.”

This past May PK released a new EP this past May entitled, The Lost Boys Sessions which was recorded at the famed Red Bull Studio in Los Angeles.

PK is a band that you can’t help but fall in love with. Described as “The Killers meets Vampire Weekend,” PK delivers a sound that is tremendous high-energy and purely awesome. They have an appealing and edgy indie-rock with a dash of pop melodies that get stuck in your head and make you want to sing along with. With their light, rocking melodies, PK is a band that you should have on your summer play list.

ESBMusic caught up with PK to talk about the new EP, their mischievous side, and their summer plans.

ESBM: How did you all come together?

PK: Travis, Nick, Mikel and Matt all met at high school in a small town called Templeton in central California. We played a bit in high school and then went our separate ways to college and to study abroad. One day we all realized playing music was a lot more fun than real life so we reformed the band and starting writing. Our drummer at the time had to leave for personal reasons, and we had met Rico through another band that we toured with so he jumped on board and the rest is history!

ESBM: Who are your influences Where did you get your band name?

PK: We have a wide range of influences. Growing up we were into the more punk/emocore scene like Saves the Day, Thursday, AFI and Kid Dynamite. As we got older we started listening to older music from the 70s/80s…a lot of Billy Idol, The Eagles, Bruce Springsteen, The Clash, etc and of course some more modern music like The Killers, The Strokes and Coldplay. The name PK is actually taken from a book called “The Power of One” by Bryce Courtenay about a boxer in South Africa who overcomes adversity to rise to the top. We all read it in high school when we were first playing music and the name just kind of stuck.

ESBM: The Berelain video features the band smashing pumpkins, were you guys mischief makers on Halloween?

PK: Well since most of us grew up in a small town there wasn’t much to do but play music and tip cows. And a lot of the time on Halloween the houses would be so spread out it was difficult to hit too many houses without becoming exhausted. So none of us ever got in serious trouble but we were all definitely as mischievous as any kid our age would be, lighting off firecrackers, making homemade napalm, and toilet papering houses. But Halloween for us was, and always will be all about the candy!

ESBM: This past May you released your new EP, The Lost Boy Sessions, what can we expect from the release?

PK: The Lost Boys Sessions is 6 tracks of upbeat, catchy tunes with a melancholy twist. This is progression in our musical direction, not so much a different direction but just the continuation of where our music is headed. On this EP every song has its own character and mood. From the synth filled leads of Berelain and Seawolves to the marching poppyness of “I Know”, the punky riff driven “Chase the Sky” and the 80’s-esque guitar chugging of “Some Nights”. We also have included a revamped version of our song “London” which we feel really ties the whole EP together.

ESBM: What is your next upcoming single?

PK: Our next upcoming single will be the 2nd track on the album entitled “London.” We had previously released the song on our full length “Into the Roaring” but we decided it deserved another chance and were fortunate enough to re-record it in Red Bull Studios.

ESBM: Will you be heading out on tour in support of the record?

PK: In support of Lost Boys Sessions we will be doing a West Coast tour going through California and Arizona starting on June 8th in Sacramento, California. More info on our tour dates can be found at pkband.com/tour orfacebook.com/wearepk.

ESBM: What are you plans for the summer?

PK: Once we return from tour at the end of June we will be locking ourselves in the studio to continue writing and recording new material for a planned Fall release. There will also be plenty of inspirational activities like camping, BBQing, shooting guns and swimming…anything to keep the creative juices flowing.

For more information on PK check out their official website, and Facebook page. Get The Lost Boy Sessions EP now on iTunes!