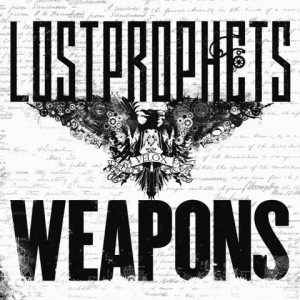 Since discovering the Lostprophets almost a decade ago, this Welsh rock band, has been one of my favorites. Their aggressive style of rock combined with softer melodies with catchy riffs, were the perfect blend of nu metal tinged with anthematic pop elements. Founded by vocalist Ian Watkins and guitarists Mike Lewis & Lee Gaze in 1997, they have come a long way, with Jamie Oliver and Luke Johnson joining along the way. Now 12 years after Thefakesoundofprogress put them on the map, they have finally released their fifth studio album, Weapons.

Weapons showcases the band maintaining their alternative rock sound with heavily distorted guitars, and toe-tapping synth lines (from Jamie Oliver, the band’s resident electronic mastermind) Whether you’re a fan of a more mainstream sound, or if you’d like to experiment with a slighter heavier album, this is the type of album any rock fan should check out. However if you are already a huge Lostprophets fan, the album doesn’t quite live up to their previous efforts, despite this outing being a very one solid that gets better with each listen.

The record opens with the extremely catchy “Bring ‘Em Down” which serves as the perfect introduction for what is to come. Complete with aggressive instrumental work, a catchy chorus and even some chanting, this is one track that is very start reminiscent of Start Something. The track leads into the hard hitting “We Bring an Arsenal” which sports yet another addictive chorus that is sure to get stuck in your head. These fast hitting songs are the type of tracks that are meant to played and shine brightly when played in a live setting.

The next two songs that follow are two of my favorites “Another Shot” which shows off Ian Watkins talented vocals and “Jesus Walks” which showcases the bands soaring melodies and lyricism. The former slows the album down providing for a mid-tempo burner with an anthematic chorus and quality lyrics. The latter, “Jesus Walks”, is the albums standout track with amazing production, vocal harmonies and a killer chorus.

The middle of the album, while decent, is not as memorable (despite Watkins experimenting with some Linkin Park esque rapping on “Better off Dead”). While the songs continue to be catchy, they do not leave a strong impression.

The album begins to pick up steam again though towards the end of the album with “Heart on Loan” and “Somedays”. Both songs tempo starts off slower and more relaxed and then picks up again where the beat kicks in, which helps to create tension and suspense for the audience, and ultimately makes them so great. Admittedly these songs will appeal more to the fairer sex (especially when Ian sexily coos “Try to make this better, I won’t break or sever” around the 3 minute mark of track 8) and might not rock hard enough for LP purists but they are amazing tracks. “Heart on Loan”, while a more sensitive song, provides for pop-rock fuelled assault. You can hear the passion and emotion behind the vocals. “Somedays” provides for a similar feel, with its bare acoustics. However it provides for an even more emotional and melodic track, one that we haven’t come to expect from this hard rocking band. The song showcases a more personal set of lyrics and ones we can all relate to. “Some days are good, Some days are tough, Some days these dreams just ain’t enough”.

The band closes Weapons with “Can’t Get Enough” which is the perfect song of the lot to close the album. With its eerie building piano, strings backdrop, and every line building and building to a powerful & theatrical chorus. Although while this is an extremely enjoyable track, it lacks the high note that the previous last Lostprophets album tracks (Sway, Ode to summer, Always All Ways) left you on…..Although for the fans of LP’s screaming vocals be sure to jump to the 12 minute mark of the last track for the not to be missed hidden track, “Weapons”, which is reminiscent of their earlier work (“Kobrakai”).

This last song is the perfect summary of the album – quality effort, with strong vocals and lyrics, outstanding instrumentals but somehow falls short of the albums that came before it. But it does continues to surprise you, while reminding you why you feel in love with the Lostprophets to begin with. Overall though Weapons is definitely worth a listen and if you are lucky enough to be going to warped tour this summer, be sure and check them out. It is the first time the Lostprophets are playing in the US in a better part of a decade and they are not to be missed!