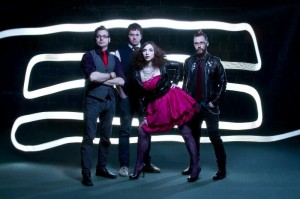 Today’s song is “Mannequin” by Dance for the Dying. This song is off the band’s second EP which is entitled Puzzles for the Traveler. The album will be released this coming, Tuesday, October 2nd. This D.C. quartet has enjoyable synth-driven indie-rock feel. The band’s sound is reminiscent of Blondie, The Cure and Yeah Yeah Yeahs – bringing a new-age appeal to 80’s and 90’s post-punk/ New Wave rock.

Dance for the Dying is M.C. Wolfe (vocals), Chris Link (drums), Joshua Hunter (guitar and synthesizer) and Brad Cantor (bass and synthesizer). The group was formed after Link found inspiration on a trip to India that set him on a musical mission. After his return, and through the power of the internet and mutual acquaintance, he recruited Hunter, Wolfe and Cantor by 2010 and they began crafting original songs while building their live sound.

Link’s trip to India not only motivated the band’s formation, but also inspired unique band name. Link saw children dancing and putting on skits to pay homage the sick and elderly people in their town. “I thought that not only was it an endearing gesture toward humanity, but also a nice parallel to what I thought a band should strive for when it entertains audiences; to enjoy life together while we are alive!”

Dance for the Dying has shared the stage with nationally touring acts The Psychedelic Furs, Mother Mother and Charlene Kaye. As a D.C. band, they have been honored to play at iconic venues such as the The Kennedy Center, The Smithsonian and National Mall.