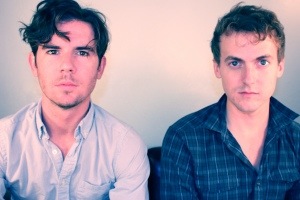 Today’s song is “Lucky Numbers” by Generationals. This is the title track from the NOLA quartet’s new EP. When Grant Widmer and Ted Joyner got off the road after touring for most of 2011 supporting their previous LP Actor-Caster, they decided this time they would write and record in New Orleans.

“The weird thing is we always go elsewhere to make records,” Widmer said. Both grew up in the city but since they have been recording music as Generationals they have never used it as a place to record.

“Part of that has probably been to avoid all the distractions of being down here. We usually like to be somewhere else so we can just focus and work,” Joyner explained. “This time we wanted to be home.”

They also decided to forego other aspects of their usual process.

“On every other record, we’ve done most or all of the tracking in one studio,” Joyner said. “But for these new songs we ended up taking all our mics and pre-amps and stuff and just going and recording wherever.”

“Wherever” meant in different friends’ kitchens or living rooms, basement apartments, or empty old houses. “The record ended up being made all over the city,” Widmer said. “Instead of investing in a studio, we looked for whatever spaces we could get access to and figured out how to make something work. We did a lot vocals in my apartment on City Park, we tracked harmonies at a friend’s shotgun in the Bywater. We used an empty house by the lake to get guitar sounds.”

“A lot of keys and synths were done at my apartment in the French Quarter.” said Joyner. “I think a lot of records are probably made this way these days, but it was a departure for us and the whole city kind of became our studio in a way.”

Three songs from this process will be featured on their forthcoming Lucky Numbers EP that will be out this Fall. The more synth-heavy arrangements will strike some as almost antithetical to what New Orleans music traditionally is.

“I’m telling you this EP is New Orleans as hell,” Joyner said. “It might not sound like it, but it is.”

The band is touring in the U.S. this Fall (see dates below).

* with Devin
+ with Maus Haus
^ with RACES