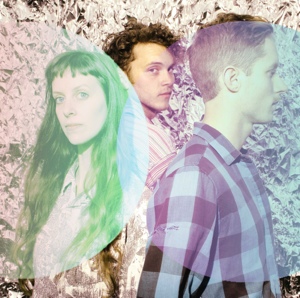 Portland, Oregon is known for a great music scene with some amazing bands and BRAINSTORM is a group that is no exception. The experimental-pop trio’s music has been described as “inescapable melodies, polyrhythmic singing, thunderous drumming, and shimmering guitar lines.” With influences ranging from African highlife to soulful AM-radio nostalgia, the result is a musical experience that is energetic, eclectic, and undeniably engaging.

BRAINSTORM formed as a duo in the summer of 2008, when Adam Baz and Patrick Phillips met while playing with Ohioan & the Native Kin. Upon exchanging a series of mix tapes containing an array of their favorite music, the musical chemistry between the two became obvious, and the band was born. They have been sculpting and refining their sound as a duo for 4 years, and just recently added Tamara Barnes to the band, playing bass and singing.

BRAINSTORM has been touring the country for 3 years, attracting attention from such tastemakers as NYLON Magazine and the Get Off the Coast blog.

Their latest release is an feel good time. The album opens with the high energetic “Flat Earth” and the record spins on to flow into each next song. They incorporate a number of instruments as well as eclectic harmonies. They have an awesomeness that reminds me of a jam bands meets rock for a perfect sound. 90s influence. Unique and unparalleled.

Stand out tracks: “Flat Earth,” “Beast in the Sky,” and “Maybe a Memory”

ESBMusic caught up with Adam and Patrick from BRAINSTORM to talk about their musical influences, Portlandia, and their upcoming tour plans.

ESBM: How did you come up with your band name?
A&P: We landed on BRAINSTORM (all CAPS, all-the-time) because we always liked the imagery that the compound word provoked: Thoughts and ideas as being a torrential explosion of synapses, like some intense weather pattern of the mind. The name also reflects our very egalitarian and diverse song-writing process, exploring a wide variety of influences and writing the songs together, without a band-leader per se.

ESBM: How did you all come together?
A&P: We met through a mutual friend and ended up recording together in an experimental country outfit called The Ohioan. After a month or so, we decided to branch off and start our own band. We swapped mixtapes of music that we were both listening to at the time and found a surprising amount of overlap, including Tinariwen, The USAisamonster, Hella, Deerhoof and others. We started jamming with no real idea of what our music would sound like and BRAINSTORM was born.

ESBM: What influences your music?
A&P: Books, the outdoors, folk and garage music from around the world, psychedelia, birds, intelligent pop music, friends who are makers, inside jokes etc.

ESBM:Being a seasoned touring band, where is your favorite place to play?
A&P: Hmm, I guess it would have to be LA. We’ve built up enough connections, friends, and fans there that we usually play two LA shows on each tour. We typically play one show at a “legit” venue and another at a DIY soace, which is a great way to glimpse different music scenes in the same city. There are some amazing bands coming up in LA right now like Gothic Tropic and Body Parts that blow my mind every time we get to perform with them.

ESBM: Are you a fan of the sketch comedy show Portlandia? Do you find it humorous or a farse representation of the city?
A&P: I wouldn’t say we’re fans of the show, but I do think it’s funny, clever, and successfully lampoons the many sub-sub-cultures that thrive in cities like Portland, Oakland, Brooklyn, and parts of LA. I think the reason why the show has been so successful is that while being specifically about Portland, most viewers can relate it to the part of their city or town that is most like Portland. We’ve found on tour that the show comes up in conversation in almost every city. It’s crazy and exciting that people look to Portland as this cultural hub of weirdness… we’re stoked to be a part of it though.

ESBM: Has adding Tamara Barnes on bass changed your sound?
A&P: Adding Tammy has been the best thing that’s happened to our band. When we played as a two-piece, the guitar playing was limited to Patrick’s ability to play bass parts and lead guitar parts simultaneously with an octave pedal. It was a fun challenge and definitely shaped the guitar style and the band’s sound. But since adding Tammy our sound is more expansive with the added voice, her bass lines, and the guitar is freed up to fill out the sound as well. We intend to work more heavily with 3-part vocal polyrhythms and harmonies as we write more songs.

ESBM: What can fans expect from your record?
A&P: Fans who have seen us play over the years will hear some familiar tunes and brand new ones as well, but recorded in a way that finally brings our live energy to record. We worked with Robby Moncrieff on the record (producer for the Dirty Projector’s “Bitte Orca” and Youth Lagoon’s 7″) and we’re incredibly excited by the sounds he brought to the record in the studio and in mixing. It’s a side of BRAINSTORM that fans have never had a chance to hear through their stereos, we can’t wait to share it.

ESBM: This summer you are played a number of local dates, are you planning to tour nationally?
A&P: Yes, our booking agents are putting together a full US and Canada tour for late September through October, so expect to see us in a city near you very soon! We’ll be hitting up Pop Montreal and CMJ too.

ESBM: Any last words?
A&P: Anything is possible.