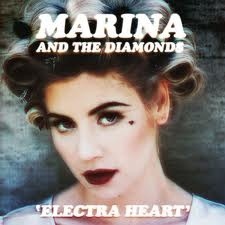 When I see a band name with a name like Marina’s, I expect a typical indie sounding band. That is not at all what I ended receiving through my ears. With a mix of pop and EDM (Electric Dance Music), this is actually interesting at points. It is a little to poppy, but there is something about it that I like. I think it is the European sound or her great voice, or the production. There is something though.

The first song, “Bubblegum Bitch,” is probably one of my least favorite songs off the album. There is something about it that annoys me a little bit. It does get better as the song progresses, though. “Primadonna,” the next song, is great. It is very catchy and has a great beat to it. Songs like this I would love to hear at a festival like Ultra and see all the lights going crazy. This song just makes me feel great about everything.

“The State of Dreaming” starts off with the potential for a song that is trance or house. Turns out it becomes a vocal-driven house song. This song reminds me a lot of David Guetta’s “When Love Takes Over” or Armin Van Buuren’s “This Light Between Us.” Its a song that you want to dance to and sing to at the same time. There are few songs, especially in this genre, where you want to sing and dance at the same time. This song is just too good to not do both.

“Power & Control” is a song that changes the pace from the previous slow song. The big is more noticeable, and more upbeat. The song isn’t a hardcore EDM song, its more on the relaxed side, but it still makes you bob your head.

“Teen Idle” is a song I was intrigued to listen to just because of the title. Turns out, the beginning lyrics relate directly to the title, and its kind of depressing. Good thing Marina comes through and makes this song great. The beginning is soft and depressing, then the keyboards come in and you can feel the build. The beat drops its soft, quiet self as the song progresses on its sinister line. Even though this song is a little low on energy, the song itself just sounds great.

“Valley of the Dolls” starts off slow and quiet and builds a great, simple bass beat. It is very easy to get lost in this song as it embraces you with its trance and beauty. Its a great transition from the previous “Teen Idle.”

“Radioactive” starts off with that feel of a great dance song. Once the song kicks in, you feel the sound. It nothing extraordinary, but the way its put together makes you want to move. The last song “Fear & Loathing” is a slow song that really has great percussion beats and a trancy bass. Its a great way to end the album because it really emcompasses ll the great things she did on the record, especially producing wise.

I have never heard of Marina And The Diamonds, but I have now, and I expect her to make a breakthrough in the United States soon. For you electronic music fans, expect a new face in town.

For more information on Marina and the Diamonds check out their official website.