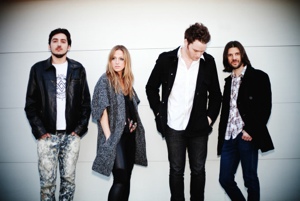 Looking for a killer rock band? Well look no further than Catch Wild. The NJ female-fronted foursome has a sweet, yet raging sound that will keep you listening. Comprised of Jessica Rose (vocals and guitar), Doug Atkins (guitar and vocals), Eric Swiontkowski (bass), and Dave DeRiso (drums), this NJ foursome has a fierce and firey sound that is catchy, yet still has a rock edge that you can’t get enough.

Beginning in 2009 as an acoustic duo, Jessica Rose and Doug Atkins began writing and performing under Jessica’s name. Realizing that their influences and natural talents were emerging and urging them to rock harder, the pair joined up with Eric “Swinny” Swiontkowki on bass and their original drummer the following spring. This powerful rhythm section, now with the great Danny Bradley on drums, brought the group to their current pop-infused rock sound, fronted by Jessica, and they were reborn as Catch Wild.

Their debut album, Waking Up With Fire, was funded by a Kickstarter campaign which raised $5,000. The band recorded and mixed the album in two weeks, working 11 hour days, and couldn’t have been happier.

The band has an initial feel that will get you interested but there is something more about their music that will keep their music in rotation on your player. With influences such as Pat Benetar, Bush, Pearl Jam and Heart its no wonder you have such poignant emotionality with high energetic rock. There is a shortage of female fronted bands these days and Catch Wild is a refreshing change of pace from your average rock band.

Stand out tracks: “Supersonic Flight,” “Star, and “The Drop”

We here at ESBMusic caught up with Doug and Jessica to talk about how the band came together, what it’s like being a musician in NJ, and their new record.

ESBM: How did you all come together?

CW: Doug (lead guitar) and I (Jessica, lead vox) actually met when we were both Freshmen at Syracuse University. I would be jamming out on guitar and singing in the stairwells with my pal Becca (now in Ra Ra Riot). Doug had his little recording lab going on in his split double dorm. I knew he was down with music and he knew I was as well. We ran in the same circle and then Doug transferred and we didn’t meet up again for aother 6 or 7 years. It was when we re-met that we instanty began jamming and writing tunes. We brought in our first drummer, a supertalent named Shawn Fichtner (he performed on our debut record Waking Up with Fire). Shawn introduced us to a powerhouse Bass player named Eric Swiontkowski…and thats how Catch Wild was born.

CW: Our plans are already in the works and it’s more fun than I can say. We are currently churning out tunes for our next record, to be recorded by a top producer in the industry, so we are SUPER excited for that! Recording may even take place in a beach house in NJ, and that will be at the end of February. We will be releasing music videos, live performances, and behind the scenes footage of recording our 2nd album. We have shows in LA on the horizon, and so much more. The talents we are working with in 2013 are so exciting. We have a wonderful video director who will be kicking off 2013 by shooting something extremely fun for us at the end of January for the single “Star” (can’t talk too much about it because we are still in the drawing board phases). All in all, a busy year, and hopefully a real break-out year for us.

ESBM: Does living in NJ influence your music?

CW: I would definitely say so. It’s a small group of musicians here in NJ. If you are in the “loop” everyone knows everyone. I can’t even fling open my guitar case at a North Jersey bar or venue without it hitting someone I know. I think rock musicians in NJ have an unspoken legacy to the sound that is grown here. It somehow seems to be infused in us. People don’t really think of NJ as a music hub because we are trumped by NYC, but actually there are so many top shelf musicians and recording studios that are in NJ. I think Jersey musicians tend to have an edge and an attitude, but also a real warmth at the same time. My favorite NJ musicians would be the obvious Bon Jovi and Springsteen, but there’s also The Bravery, Karen O. from the Yeah Yeah Yeahs, Debbie Harry, The Fugees, My Chemical Romance, Whitney Houston. Spin Doctors, Frank Sinatra (He used to have his favorite Hoboken Mozzerella flown around the world to him – I love that. I would have Star Tavern pizza flown to me)

ESBM: What can fans expect from your new record?

CW: Fans can expect a more mature record. That’s already evident in the songs we have crafted for the new record and still alot more writing to be done. We are taking the stage and owning the female-fronted arena rock genre. Think the Pat Benatar of today. Bold words, I know. We have heard people make the Pat Benatar connection so many times at shows that its like, “ok I guess we have something here that people are really feeling…let’s run with it” We are not looking for an 80’s sound by any means, but definitely a high energy, fun, well-written record that can be listened to from beginning to end without wanted to press “SKIP” at any single point in time. Every inch should be awesome. I love Paramore’s album Brand New Eyes. Every song is beautiful, heavy, edgy, sexy, and well rounded all at the same time. We strive for that level of greatness but in our own style. We want every turn to be thick with wisdom. We aim to be awesome in the studio and on stage, and the bar is being set high.

CW: Yes! Get in touch with us! We would love to hear from you! www.Catchwild.com. Peace and love and Happy 2013.

For more information on the band check out their official website. See the band live March 6th at the Studio @ Webster Hall.