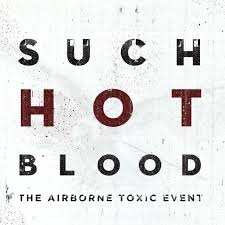 I consider myself to be a big fan of The Airborne Toxic Event and I really wanted to love this album on my first listen. However that wasn’t the case. I actually had to listen to it three times to even decide how I felt about this album.
On my first listen the first track “The Secret” just sounded like it was trying to be another “Sometime After Midnight” which it could never be. “Timeless”, which was released as the first single off  Such Hot Blood, I felt was a little flat. The only tracks that really stood out to me were “Safe”, “The Fifth Day” and “Elizabeth”.

The album is just OK, I wouldn’t say it was terrible, but it didn’t move me the way their self-titled debut album did. Check it out for yourself and let me know what you think?

Such Hot Blood is available on iTunes and Amazon, or listen on Spotify.