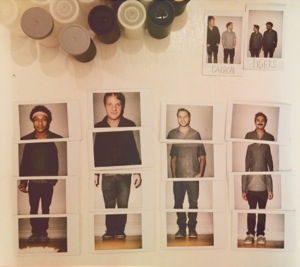 Today’s song is “The Wars at Home” by Carbon Tigers. Carbon Tigers consists of Chris Wienke (vocals/guitar/bass), Nick Cudone (guitar/vocals), Aaron Sweatt (bass/guitar/keys/vocals), and Darien Williams (drums/vocals). This is the title track off the indie-rockers new EP. Lead singer, Chris Wienke, says the song “is about the forces that pull your heart in every direction when you make a big move in life. Sometimes it’s hard to reconcile the decision to create a change, but ultimately the love of those around you proves to trump all doubt; and those moves often become the best things that ever happen to you.”

After having their equipment, merchandise, and van stolen, Carbon Tigers rose to the occasion and crowd funded over $12,000 to purchase new gear. They have since then made their mark performing at the Brooklyn Vegan after party at Lollapalooza and sold out shows with Cold War Kids, Gold Motel, Further Seems Forever, Biffy Clyro and Maps & Atlases. The upcoming year will prove to be the biggest year for Carbon Tigers as they continue to expand outside of the Midwest and share their music with new fans alike.