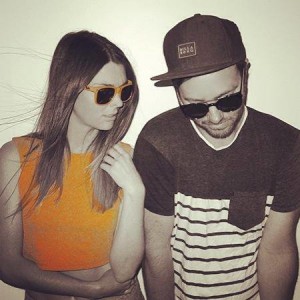 ALLIE & IVY are an indie duo composed of singer Aleisha Conlay and instrumentalist Matais Coulter. Hailing from Sydney, Australia, they first met in 2010 and formed the ‘band’ a year later, thus becoming one more example of the dozens of solid indie rock/dance bands likely to explode from that scene.

While they’ve been releasing one song at a time, newer single “Cowboys & Indians” is the obvious song choice to get acquainted with the band. The first thought that ran through my head was of Coldplay, and that’s nothing but a compliment. Pop-wise, it borders the “Viva La Vida” vibe the group struck from their use of sadder piano pop paired with uplifting melodies. While the track is the most immediate of their material, it’s not a great representative of their overall sound.

“Bang!” is a snazzy, jazzy number that doesn’t really fit into the indie-electro-pop mold the band bills itself under (at least the ‘electro’ part). The lyrics are playfully dark and a bit grimmer than one would expect from something that sounds like an updated take on 40’s cabaret. That cabaret/lounge melodic style runs through most of the band’s older tracks, with “Shades” coming off like a Ditty Bops number and “Wolfcry” sounding more than a little like Lykke Li.

At this point, ALLIE & IVY are going to need a few more tracks followed by a full release to really start making waves, but what they’ve done so far has definite potential and that’s what makes them ESBM’s Artist of the Month.

We caught up with the band to talk about how they came together, their musical influences, and their upcoming music.

ESBM: How did you come together?
A&I: We actually met in 2010 on a flight headed back to Australia from overseas holidays. Seated next to each other on the plane with an overweight asthmatic on the end who couldn’t stop talking, coughing and snacking we immediately bonded over our intense discomfort. We soon learned we both shared a lot of the same musical aspirations and thought, “What the hell – let’s do this and see where it takes us!” We’ve been writing together ever since.

ESBM: What influences your music?
A&I: Anything and everything! We listen to all kinds of music to figure out what we think works and why so that we can then try to incorporate it into our own songs. Our backgrounds are quite different: Allie was brought up on 60s music and also studied musical theater at university, whereas Matais loves funk music and grew up playing in punk bands in country Australia. We’re currently both really loving bands like Grouplove, Of Monsters and Men, The Lumineers, The Naked and Famous, Imagine Dragons, Passion Pit…Anything with a good vibe, we dig!

ESBM: Are you working on any upcoming music albums?
A&I: At the moment we’re working on our debut EP which will be released this year, which we’re really excited about.

ESBM: When composing music how do you write?
A&I: We compose all our own music – the way it usually works is Allie will come up with a hook or melody and lyrics and Matais will lay down all the instrumentation. We record everything in Matais’ little home studio after realizing people responded more positively to that rawer sound rather than having it produced in a big, expensive studio which can sometimes impact on the overall vibe. We generally try to write energetic, catchy, uplifting songs that people can relate to.

ESBM: What is your favorite place to tour?
A&I: We’re yet to tour outside of Oz but we’re dying to get our asses over to the U.S!! Hopefully we’ll make it over in the not too distant future. It seems our music has been really embraced by America and we’d love to head over there and tour.

ESBM: Any last words?
A&I: Check out out the single “Shades!” We wrote it late last year during the Australian summer and to us it totally encapsulates that sense of ‘fun in the sun’. We’re really happy with it and are keen to hear what people think!

For more information on Allie & Ivy check out their Facebook and Soundcloud page.