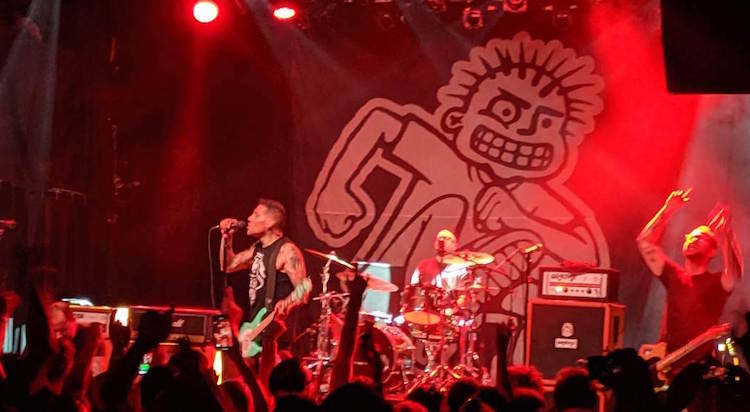 Saturday night concertgoers gathered in NYC for an exciting musical event. Irving Plaza was the scene for this festival and it brought together multiple generations of punk rock music lovers.

Like most concerts, the bulk of the audience came out when the headliner took the stage.

Getting to the venue early has its perks. You can stake out a good spot on the floor. Plus you have the opportunity to learn about new bands.

Come in too late and you may miss out on some music events. That would definitely be the case for Saturday night’s show.

The show started off with Rehasher. This Florida trio was just what a punk band should be: fun, loud, and fast. This band was started by Roger Lima. Lima is best known as the bassist and co-lead vocalist in the ska punk band Less than Jake. Rehasher was a great opener to the night. They got the crowded pumped with their hard-hitting punk rock anthems. They had enthusiasm and fervor impressing the crowd with their witty banter and musical charm.

Up next was California band, Unwritten Law. They started with the high-intensity, drum-heavy “Teenage Suicide.” This got the crowd amped up and ready to rock. The rest of the set consisted of tracks from their 1998 self-titled album along with songs from their 2002 release Elva. They ended with the “Harmonic” which was shortened due to time constraints.

The whole show got off to a late start due to some, unfortunate traveling issues MXPX encountered on their way to NYC. A goose got sucked into their plane’s engine and the pilot had to turn back to the airport. They were going to fly into Newark but then there was a huge debacle which prevented them from getting here on time. After going through all the possible travel avenues, they decided to charter a private plane. Luckily, they made to the city with 20 minutes to spare.

The guys took the stage at 10:30 and were met with a loving welcome from the crowd. Mike Herrera told the story of their travels and then started the show “My Life Story.”  A fitting song for the night with the lyrics “I was on a plane that was falling from the sky/I knew I had to survive so I could say goodbye.” Despite the time crunch, they played a good amount of tracks. Some from the new album and some oldie fan favorites like “Chick Magnet” and “Responsibility”

The band was playing off the energy from the crowd. I was surprised how many people were still in the pit at this age. It was a fun show and it brought back so many good memories from when I first saw them back in 2001.

The dedication and showmanship are pretty amazing for this band. MXPX have been playing music together since 1992. Mike Herrera said during the show that they were coming up on their 27th anniversary.