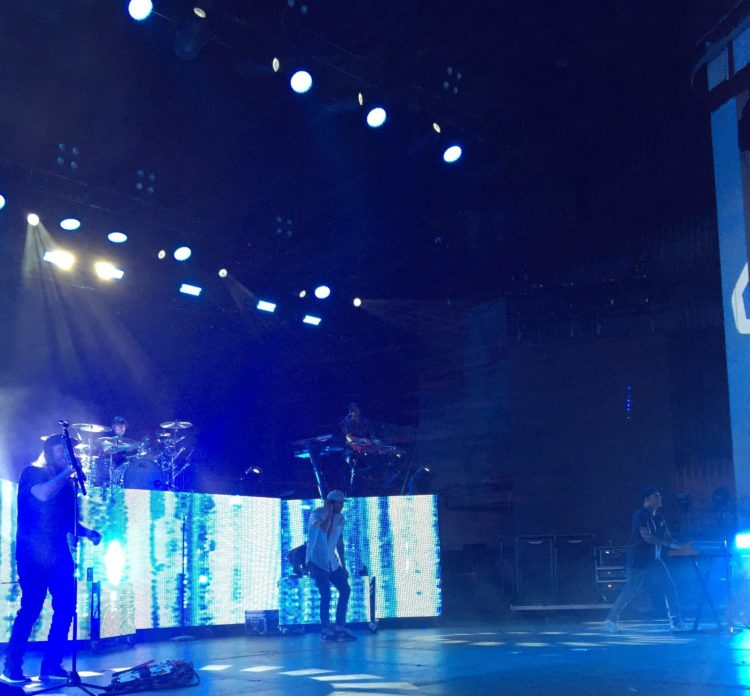 Even though it was a summer night, the show started quite early due to its five acts taking the stage. Anyone who wanted to see all the bands had to be there by quarter to six. So if you worked a regular 9 to 5 job you were SOL.

This was the first time we got photo access at a PNC show. Little did we know how arduous a process it would be.

Bottom line: if you don’t get here early you’re screwed.

Normally when you get a photo pass the venue will give you a sticker and let you into the show. This was not the case at PNC. Instead, they tell you you need to meet 20 minutes before the show and have to be escorted into the photo area.

Unfortunately, I was not able to make it to the show early due to my regular gig.

I got to the venue around 7 pm hoping to catch some of the Interrupters set. When I went to the will-call office they said they had my pass but I would need to be escorted up and that would be at 7:40.

I was really frustrated that I had to wait that long and also mad at myself for not being able to get there on time.

The woman who came out was nice and instructed us what to do. She was adamant about not having the camera out after we left the photo pit which I have never heard of before. I felt like I was at a prison camp scared to make any moves.

I guess I know for next time I need to get there early if I want to take photos of all the bands.

The one upside of waiting was I met a really nice photographer who was invited by 311 to shoot the show. He even gave me some free 311 stickers. If you want to check out his stuff see his Amazon store.

The woman rolled in at 7:40 and then escorted us into the venue. She left me to get water and was like “just walk down there.” I was thankful that I was finally inside but I was also frustrated at the need for this escort business.

PNC does not have an actual photo pit so you need to just stand in the aisle at the first row. Walking down there with my photo pass made all the waiting worth it.

Being front row was so awesome even if it was just for three songs.

Dirty Heads was scheduled to come on at 8:05. They made their way on stage a few minutes after the set time.

Like most shows, the majority of the fans did not show up until the headliners came out. It was empty when I went down to get ready to shoot Dirty Heads. But then a song or two in I was surrounded by fans taking selfies and singing along with the band.

The stage set up featured three big screens that resembled old television sets. Sitting atop each one was a percussion drum set, a regular drum set, and one of their two keyboardists. Off to the right was another keyboardist.

Fans in the front rows rushed the stage to take videos, selfies, and dance to the music.

They opened with the rap infused romantic lyrical “Burn Slow” off their Sound of Change album.

When I got back to my seat I was able to focus more on the show. Lead vocalists Dirty J and Duddy B were center stage and moving around getting the crowd amped up.

As the set went on, the smell of weed wafted through the air against the backdrop of the summer night sky.

Dirty Heads is not just a band who likes to sing about smoking up. They have some real depth with their music.

Combining various musical styling they have a diverse and creative sound that features hints of reggae, rap, and hip-hop offering something for everyone. This was heard in their set last night.

It featured an infectious amalgam of music. Everything from straight-up harder hip-hop tracks along with songs that conjure up fun-filled days of relaxing and chilling with friends like “West Coast,” “Lay Me Down,” and “Lift Me Up.”

Other songs offered hints of pop melodies, reggae riffs, and catchy rhythms on “My Sweet Summer” and “Red Lights.”

Dirty Heads are a band who likes to have fun but also brings a lot to the table both musical and lyrically.

As far as crowd interaction vocalists Dirty J and Duddy B did not do much talking. However, when they did speak to the crowd they showed their appreciation and love for their fans.

And the crowd was reciprocating that love. Fan favorites included “Lay Me Down” and their new track “Lift Me Up”

Towards the end of their set, they took it down a notch with slow jams including “Moon Tower,” the lovelorn reggae track “Oxygen,” and the acoustic “Sloth’s Revenge.” The sweet friendship track with lyrics “like goonies, never say die.”

They closed out the set with the fitting summer-esque song “Vacation.” This was a good choice as the crowd was loving this track. Watching everyone dance and sing along gave me goosebumps.

After the song ended we were faked out a bit as some dubstep music started to get cranked up. I thought the band was doing an encore but it turned out it was just their stage exit music.

If you are looking for a chill and soothing musical experience I would highly recommend checking out Dirty Heads live. For more information on the band see their official website, Facebook, Instagram, and Twitter pages.