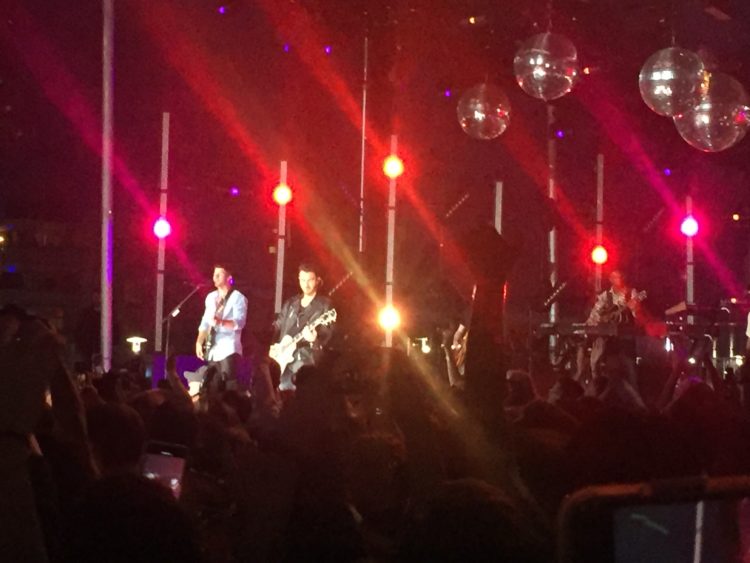 This week The Asbury Park Press reported that The Jonas Brothers were coming down the shore for their 2018 VMA’s performance.

Wanting to check out the performance I went down to meet my mom and 17-year-old cousin who was a big fan. We saw people were lined up and were not sure if there was the ability to see the band. We asked someone who worked for the show and they told us that if we got in line we could be guaranteed a spot in the crowd.

We stood in line for about 4 hours but the time actually passed rather quickly. It was worth it since we got a pretty good spot close to the stage.

Once the sun was down behind the stage show was ready to start. Fans eagerly waited for the boys to hit the stage.

After about 20 minutes or so you started to hear shrieks and screams and you knew the band was coming. Members Kevin, Nick, and Joe came on stage to play the rest of “Sucker.” The second part of their performance was on the boardwalk stage and featured their current single “Happiness Begins” complete with a beach fireworks display.

Fans were super excited and everyone had their phones up capturing all of the music. They played two more songs an encore of “Sucker” saying “they played it inside and would play it for the crowd outside as well. They played another track and then walked off stage.

Watching the complete performance below it was pretty cool to see how it came out. They took over Asbury starting at the legendary Stone Pony and walked across the street to a custom stage build on the boardwalk between First and Second avenues.

I was surprised to see how packed the boardwalk was for this event.