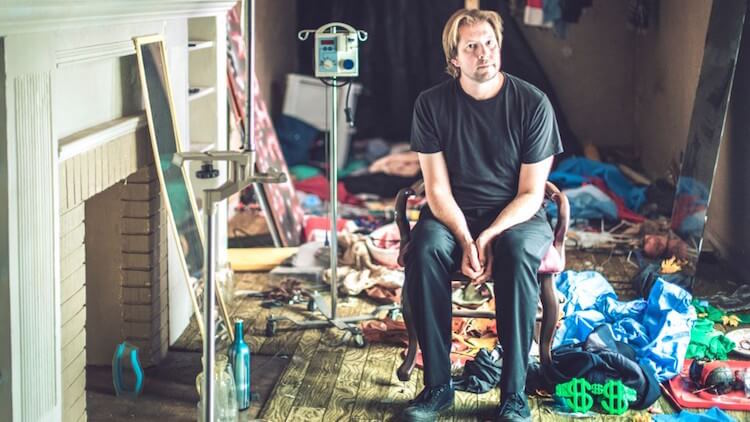 Feeling a case of the Mondays? Watch this video by The March Divide and it will put a smile on your face. Not only is it humorous but has a great message attached. Don’t let anyone get you down.

Putnam says, “This song is my own personal anthem to all the haters,” “While that might come off as petty or shallow, I think we all need one. I’m tired of letting myself feel insecure, based on the opinions of people that don’t even matter. I’m really making it work, and that’s more than just about any of them can say about themselves.”

This track is off their two-song Distractions: Vol. 4 and was directed by Hector Gallardo of Subharmonic City Productions and filmed in Blanco, TX.

It is a fun silly look at how you can still moving along despite anything that might get you down. “As hokey as it is, this video honestly portrays my experience in life and the music business,” Putnam said. You’ve just gotta get up and keep moving forward, no matter what knocks you down.”

The video opens with him having car trouble. Instead of getting mad he dons a red sweatband, red glasses, and starts jogging to his destination. Through his journey, he encounters lots of obstacles along the way but he still keeps on going with perseverance and humor that will brighten your day and may give you some enticement to keep moving.

About Jared Putnam and The March Divide
Jared Putnam of The March Divide is a prolific songwriter and has developed his style in public by releasing material at a non-stop pace. A deeper, more personal, and risk-taking approach to his lyrics took hold with Putnam’s most recent full-length, 2018’s Anticipation Pops, and continues with the “Distractions” series of singles that is now up to its just-released fourth volume.

“‘Distractions’ is something I came up with as a way to continue to release the music I’m working on, between albums,” Putnam explains. “The name refers to the fact that when I’m writing and recording these songs, it’s usually a distraction from the things that I feel like I should be doing, like the business part of what I do. But at the end of the day, writing and recording is all I ever want to do anyway.”

Showing audiences more and more of what he’s about has helped The March Divide build a loyal following in the markets that Putnam frequently visits, and he’s not only a good showman on stage, he takes the time in-between songs and after the gig to connect with fans. It’s a personal touch that’s keeping him in business.

It’s Putnam’s affable way of grinding it out and hustling that has allowed him to do the thing most touring songwriters are unable to do, which is to keep on doing it at all. His growing fanbase funds the tour and their belief and appreciation of Putnam’s work has pushed him to his best songwriting to date.