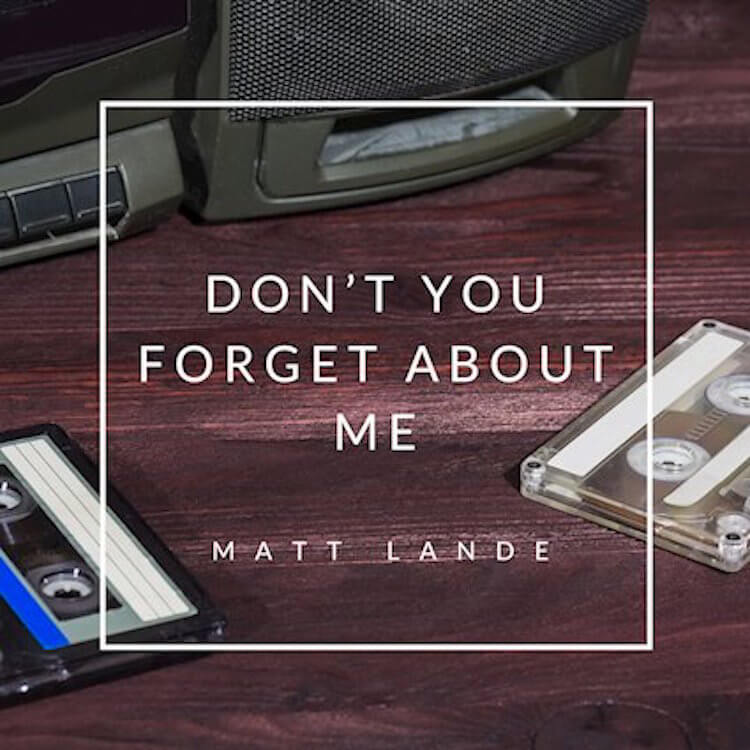 Today’s song is “Don’t You (Forget About Me) Cover” by Matt Lande.

The Portland, Oregon based artist grew up in a small Central Florida town. Lande was bitten by the music bug after taking a guitar class during his senior year of High School. He found his passion and starting to hone his skills as a songwriter, guitarist, and vocalist in local and regional bands he eventually found himself at the point of joining alt-rockers’ StorySide: B.

Shortly after joining the band, they signed a deal with Gotee/EMI and toured extensively in support of the album “Everything and More”. Matt co-wrote the title track which was released as a single and climbed to the top of the charts. Lande spent 3 years with the band and then decided to move to Los Angeles where he signed a new deal for his own music as the lead vocalist, guitarist, writer and co-producer for the band Heaven Is Where. The following 5 years in Los Angeles were spent releasing 2 full-length albums (Stories From Yesterday & Welcome Home The Child), a side project (DarkStar the EP) and performing with both his band and acoustically as a duo or solo until fulfilling his record deal.

Lande relocated to Portland in 2013. This marked a fresh start for his indie music career as well as gigs working in film and television as a Double and Stand-In for actors such as Noah Wyle, Travis Fimmel, Steve Buscemi, Alexis Denisof and more.

The end of 2015 brought the release of his critically acclaimed album GLOW; a collection of emotive alt pop that would easily fit alongside the mainstream singer-songwriter material currently heard on terrestrial radio.

The success of GLOW gave Matt the confidence to experiment more with his new material, leading him to self-produce and mix his album “Boxes” in 2017 as well as his latest album, “Aftermath”, in 2019.

Additionally, Lande has been getting accolades from outlets including Impose Magazine, Songwriting Magazine, IndependentMusicNews24, and WeChameleon calling his music “A brilliant alternative pop rock affair,” “stratosphere shattering,” “an exorcism of emotion,” and “proposulvie and dynamic.”

2020 sees Matt continuing to write original music for an upcoming EP due out at the end of March. Currently, this cover is the latest release from Lande.

Being a fan of 80’s New Wave, it is fitting of Lande to cover this track. His rendition of this track is a fun time.