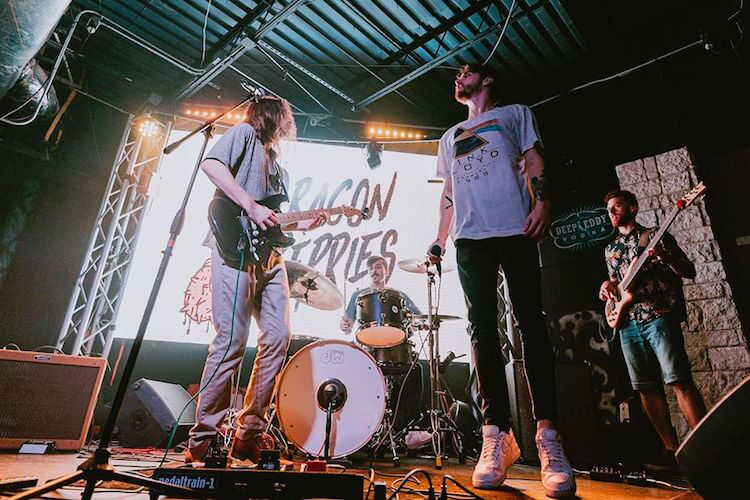 Today’s song is “Nectarine” by the Dragon Berries.

The Austin-based quartet was founded when Quinn Donoghue and Connor Poteat were living together in Boone, North Carolina while attending Appalachian State University. The two of them began writing songs with the hopes of one day starting a band. The intent was to fuse the hip-hop influence of Poteat with the blues/rock influence of Donoghue to create something unique. Poteat decided to leave school and move to Austin, Texas in 2017 where he met Chris DePalatis and Reid Harmon. He showed Harmon and DePalatis rough recordings of some guitar tracks and they subsequently agreed to start a band. Donoghue then moved to Austin in early 2018 and the musical journey of The Dragon Berries was underway.

This is the latest single from their upcoming EP entitled And The Moon Turned Red due out July 10, 2020.

Dragon Berries brings a sweet sound with a message on this new track from it’s first few notes.

“Nectarine” opens channeling 60’s and 70’s funk rock riffs against a wave of catchy hip hop delivering a message of hope during a time we could really use it.

The group’s main focus is to inspire and uplift the listener. Though a serious and dark lyricism there is an enriching spirit that can be found in its uptempo choruses.

It is an anthem for overcoming obstacles of depression and anxiety. When describing the song the band says, “‘Nectarine’ is a song about the internal struggles we face within ourselves. Sometimes we can be our own worst enemies by having negative thoughts and emotions, and it can be very difficult to ignore this constant chatter in our minds. The song details ways to overcome these challenges such as pursuing your passion, making choices for yourself without regret, and self-reflection. Rather than external forces, such as society or other people bringing us down, it’s simply our own thoughts.”