When you hear your favorite songs you get this nostalgia that cannot be surpassed. This was definitely the case for me and everyone at The Get Up Kids show Saturday night.

I am always up for finding new music but there is something just so exciting when you go see a band you’ve been listening to for years.

Music can evoke an emotion or memory and is the case with The Get Up Kids. I was introduced to this band back in college by my roommate. I was enthralled by their lovelorn emo and rock.

Unfortunately, I never had the chance to the band until now and I was super pumped.

For those not familiar with Asbury Park, it is a great place to catch live music. The last couple years the town, boardwalk, and beach have been revitalized so people are going there to do more than just see bands at the Stone Pony and Convention Hall.

It is so popular now you can’t go there on the weekends without having to deal with huge crowds.

This weekend the Convention Center was hosting a tattoo convention. So between that event and the beach goers, the boardwalk was lined with a sea of people.

Parking can sometimes be a pain in this town. So we opted to ride bikes in order to save time looking for parking.

We parked our bikes in Ocean Grove, the seaside town to the south of Asbury Park.

We had enough time to grab a bite to eat on Cookman Avenue, which is the main drag in Asbury Park. This is also where the House of Independents resides. This venue is new to the music scene in Asbury. If you haven’t been here yet I highly recommend checking it out.

I have been to this venue a few times and I really enjoy the ambiance. It is a more intimate venue and with a cool vibe.

This venue offers a dark and edgy club feel. Walking in from the sunny outside you are immersed in a dark room only lit by the stage and twinkling lights above the bar. It’s got a real cozy atmosphere that makes for a small show feel.

The other nice thing is you don’t have to worry about not being able to see if you wind up in the back of the room. You can watch above from the bar with an elevated view without having to buy VIP seats.

Since the space isn’t that big you have the ability to have a good view from wherever you stand.

We got there at 8:15 pm and there was a good amount of people already inside hanging around the bar. People were meeting up with their friends waiting for the show to start.

We decided to walk down to the floor area and wait for the show to start.

There was only one band opening and they were called Great Grandpa. Intrigued by their name I listened to a few tracks and wanted to check them out at the show.

It is always funny how when the opening band is on no one wants to get close to the stage. I don’t know what that is about. Maybe it’s because you feel weird when there is a less crowd or what. But this was the case when they played.

Great Grandpa hailed from Seattle, Washington and had two singers: Patrick Goodwin and Alex Menne. I liked the combination of male and female singers. They charmed the audience with their noisy 90’s feel that reminded me of distorted grunge rock.

They were very friendly and playful. I liked their interaction with the crowd asking questions and explaining their song tracks. I liked the interpretation of what the Aliens at Area 51 anniversary will sound like.

They killed it with their set and it was cool to see some fans in the crowd. Closer to the front there was a couple who were really excited to see the band. They sang along and rocked out to all their songs.

As soon as the Great Grandpa left the stage people quickly moved up to the front of the stage. This venue did not have any photo or security pit so you had the ability to be right at the stage. I was not sure how tight the crowd was going to get so I opted to stand by the steps closer to the side. 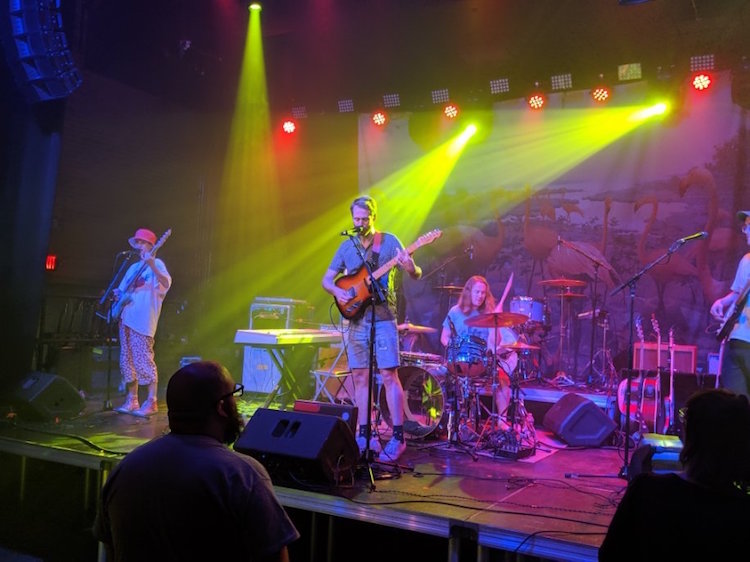 It turned out to be a good choice and I had enough room to stand and stretch out if I needed to move.

As it go closer and closer to 9:30 the room was getting more packed. Everyone grabbed their drinks and headed down the stairs to get a closer view.

The band was slated to come out at 9:30 but they were a little late. The crowd did not seem to mind. They were having a blast chatting and hanging out. I think it was about 9:45 when the lights went low and sound of Will Smith’s 90’s jam “Summertime” played.

The crowd was super pumped for this show and were cheering as The Get Up Kids took the stage and strapped on their instruments.

They opened hard with sad, yet rockable track “Satellite.” This song is off their recent Problems album. I thought this a was a great song to start with. It is a lyrically emotive song with a rock edge to get the crowd pumped.

Next up was the oldie, but goodie Pee-Wee Herman inspired track “I’m a Loner Dottie, a Rebel.” The band didn’t even need to sing this as the crowd knew every line. As they played this song goosebumps lined my arms as everyone in the house was singing along.

They went on to play a large chunk of songs from their new album Problems which the crowd was digging.

I liked the song “Lou Barlow” with its saccharine romantical lyrics that were humorous and also sad.

They played a lot of newer stuff with some older tracks slipped in between. Fans were totally nostalgic for all tracks off the 1999 album Something to Write Home About.

The band was playing off the crowd’s loving reaction. At one point Matt Pryor thought it was cool people brought their kids but he had to be careful he didn’t swear. Then Jim Suptic chimed in saying something about it’s ok because it’s New Jersey. I missed some of what he said which sounded like a diss to our state. However, the crowd didn’t seem to care and took it as a compliment.

They slowed things down with the acoustic “Campfire Kansas” and the crowd sang along in unison.

Listening to the band they had a tight sound and really rocked the crowd. There was an energy in the air of love and appreciation for this band who has been there for their fans over the past 19 years.

The best part of the evening was when the band played more of their older collection. They ended the show with “Action and Action” then came out and did an encore with fan favorites “Out of Reach,” “Holiday,” and “I’ll Catch You.” They ended the set with “Ten Minutes” and it was the perfect song to end the night on a high note.

All the girls were singing to each other when they played tracks like “Out of Reach,” “Red Letter Day,” and “Ten Minutes.” Everyone was having such a great time that night.