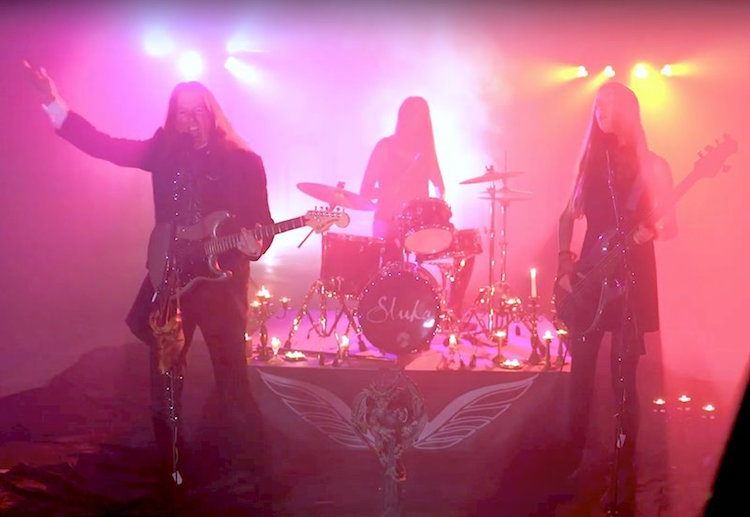 Today’s song is “Vampires Ball” by Sluka. The San Diego group is led by Christopher Sluka – singer, songwriter, musician, and performer – who has recorded eleven studio albums and has a fan base that spans across continents.

Born near Seattle, Christopher enjoyed a multinational upbringing as he was raised all around the world, with his family never spending more than a couple of years in any one location – a life experience that is evident in his cosmopolitan musical compositions.

At the start of his career, performing on the New York Club scene, Christopher found himself in the same melting pot with artists such as Tears For Fears, INXS, Talk Talk, and Simple Minds. But after recording a single in Los Angeles (with Cat Gray who worked extensively with Prince), he found an appreciative audience in Japan, where he went on to release a further two albums. His body of work includes the critically acclaimed Emotional Battlefield, Fear of Ordinary Life, A Matter of Perception, Solo Flight, and, more recently, Introversions.

Over the years, Christopher’s visionary style has developed and matured – always remaining enigmatic, yet keeping a focus on creative songwriting, while cultivating an international reputation for his enthralling “live” performances.

That stagecraft has allowed Christopher to map a career where he has been able to sell-out venues for his concert performances, often using those enthusiastic audiences to mark the release of his records. And critical demand has also resulted in Christopher enjoying numerous television appearances, memorable radio interviews, and excellent press reviews, wherever he has traveled and performed. He has gained immeasurable experience from his passion for performing “live,” to which he credits the strength of his powerful yet sensitive voice, as well as inspiration for his songwriting. Of course, Christopher hasn’t achieved this success all by himself; he has been fortunate to work with some of the most talented musicians in the business, many of whom have become lifelong friends. And although he has been gifted enough to be compared to icons such as David Bowie and The Beatles, he has also been compared to more contemporary artists such as Coldplay, Radiohead, The Killers, and even the ethereal Sigur Ros.

In addition to his uniquely accessible music, Christopher is also a globally renowned visual artist and his surrealistic oil paintings have graced wall space in galleries from New York to San Diego, and Tokyo to Milan. Away from the arts, Christopher is an avid distance runner. And when he doesn’t have his feet on terra firma, Christopher is an accomplished aircraft pilot (Jet type-rated) and owns a flight school in San Diego.

Sluka has created an enticing and passionate ballad. It merges the dark gloom melodies with a post-punk for a sound that is refreshingly exciting and beautiful David Bowie-esque metal ballad.

The song has an accompanying video is equally effective, jarring even, as it takes us through our current predicament in epic scope. We are undoubtedly living through strange days. This is one artist’s interpretation.